Your Guide to the SCAT 5 Revision

Some big news came out on Wednesday that the newest update to the Sport Concussion Assessment Tool (SCAT) came out. In this revision, they decided to skip over the number four and go right to five (most likely to coincide with the number of international meetings they have had). If you look closely you will see that essentially nothing has really changed in terms of the tests administered for the SCAT, however, they did improve the overall design of the testing materials and it seems like from first looks that it should be easier to use. Now on to the step by step comparison of the SCAT3 vs. SCAT5.

If you want to download the SCAT5 the link is at the bottom of this article.

You’ll first notice that in the SCAT5 there are a lot more design elements that draw your attention to certain aspects of the form that most likely went unnoticed or didn’t stand out as much in the previous version.

These large red blocked areas show up quite frequently within the entire form itself.

In step 2 they simplify the observable signs and make the distinction that a doctor could be watching a video recording of an athlete after the incident happened or during the event. 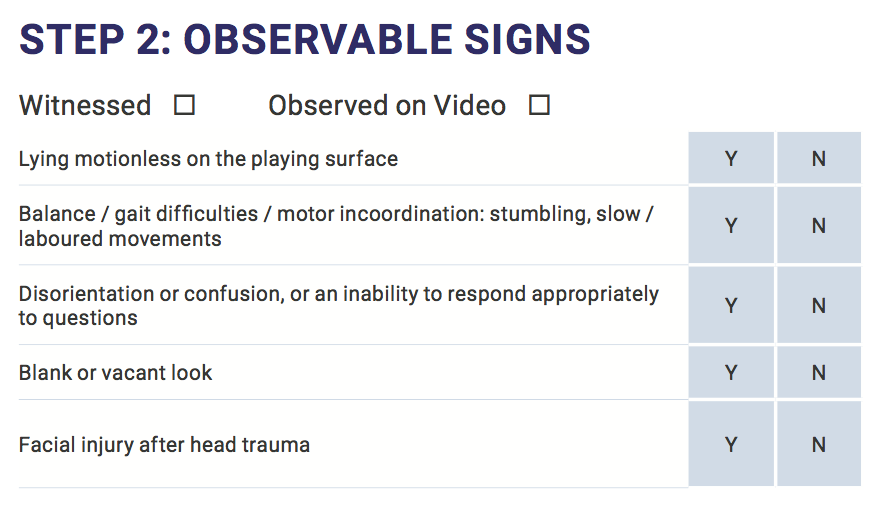 The next two sections of the SCAT5 remain pretty much untouched with just revised graphics to keep everything looking consistent. However, the test now goes into a  cervical spine assessment that was not in the previous version. They also add a fairly obvious statement about c-spine injuries that most medical providers should be aware of.

The form then moves on to the symptom evaluation where it is emphasized to hand the checklist to the patient and have them score themselves. This method of scoring would seem to suggest that athletes when asked about their symptoms, don’t report them as honestly as when they take the pen and paper themselves and score their symptoms. Furthermore, the scoring asks that the patient what percentage they are feeling out of 100% and if they are not feeling 100% why. These two questions in particular, could give clinicians a better idea of how a patient is progressing rather than just a score out of 132 or 22.

For the concentration test, the SCAT5 makes it clearer that you should not use the same numbers if an athlete messes up and you want them to try again. Additionally, they have provided more lists of alternative numbers.

The months in reverse order remained untouched with the exception of clearing up the directions for the test.

The next new section of the exam is the neurological screening. while this part of the exam doesn’t seem to be entirely new because it merges the neck examination and the coordination examination portions of the SCAT3 and adds some different central nervous system check questions. It also moved the tandem gait portion of the exam from the end of the balance portion to the end of this revised section.

The final section of the testing that was changed is the delayed recall portion where it lays out clearer instructions for how to conduct that test and to document how much time elapsed since the last testing of the immediate memory test.

The “decision” portion of the SCAT5 form is also quite a lot larger than that of the SCAT3. Furthermore, the SCAT5 provides more space for the documentation of the health care provider, whether or not a concussion was diagnosed, if this was re-testing, and a nice large warning.

The final change that happened in the SCAT5 form was the introduction of a return to school/work protocol. It seems that through what I personally have seen this is typically the policy that most athletic trainers in the traditional setting of high school/ small NCAA D3 school setting use as their protocol. However, now for schools that have lacked athletic trainers, there is documentation on how it should be done and no school should have an excuse for not following that protocol.

The overall number of pages has increased from the SCAT3’s 5 pages to 9 pages. However, with this also comes a lot more space to write and more options for immediate memory and concentration testing and more detailed directions on how to properly administer the testing. This revision is a welcomed change and it looks like there was more input from graphic designers in the revision of this new form. Overall, this should help make the healthcare providers lives easier when administering the testing.